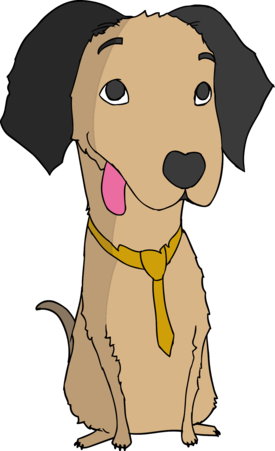 Born to a St.Bernard mother and a Shit-tzu father, Stink met Bruno Delavigne as a puppy after wandering into the Delavigne family garden in San Francisco, while trying to escape a pair of rabid bulldogs. Bruno and Stink bonded immediately, dancing and playing among the tulips and cacti. When Bruno began his apprenticeship under his grandfather Xavier, Stink followed Bruno to Paris by hiding in Bruno's carry-on luggage.

Stink proved to be an able perfume tester, allowing Bruno to spray him with various odors and fragrances. After Xavier's death, Stink dug several holes for Bruno to dump the body, however Bruno opted for a more traditional funeral.

A loyal friend and intimidating guard dog, Stink comes to work with Bruno every day, and has free reign of the Delavigne offices. Though Stink occasionally fights with Delavigne's volunteer laboratory monkeys, he is a friendly creature and very popular among the staff, particularly the ladies, who find his soft fur and 'cute little nose' to be his sexiest features.

Stink lives by one motto: If you can't eat it or make love to it, then urinate on it. His philosophy is currently being adapted into a screenplay.

Is this your little dog? This is the cutest little dog I've ever seen!