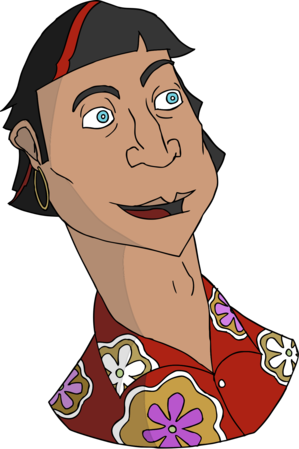 Born and raised deep in the jungles of the Amazon, Horatio learned the secrets of plants and herbs and mastered the science of fragrances at a young age. Horatio provided medicinal healing to local villagers and also dispensed spiritual advice to those in need. In his late 80's, Oléré met Bruno Delavigne and the two quickly became friends. Horatio accepted Bruno's invitation to become the 'nose' and head perfumer of Bruno's new company.

Horatio has his own laboratory at the Delavigne Corporation headquarters in San Francisco, and full creative control of the Research and Development department. Oléré is both admired and feared in the Delavigne offices for his volatile personality and obsession with interesting smells. He is constantly experimenting with revolutionary new odors and fragrances and is Delavigne's secret weapon in the ultra-competitive cosmetics industry. In Horatio's own words: 'the beautiful perfumes don't create themselves!'

In his free time, Horatio volunteers by reading to the elderly, including himself. Oléré is also improving his English slowly but surely by using an innovative new online course.

Although Horatio can sometimes irritate his colleagues with his personality and constant nudity, he is generally appreciated by the entire staff for his honesty, passion and the variety of mind-blowing odors he produces. When Horatio isn't sleeping in his office or drinking at his custom-made bar, you can usually find him in the break room, plotting against Delavigne Corp accountant Icarus Quincy.

I make interesting smells.
I cannot think! I'm hungry! I need meat!
Let me put on some clothes first.