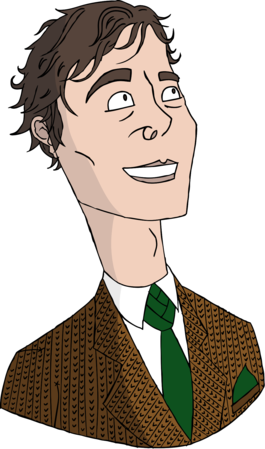 Not much is known about this tall, pale and handsome special assistant, however his presence has caused quite a buzz within the Delavigne offices. Skilled in numerous combat techniques, Jones claims to have been part of the SAS, completing super secret missions for the British government. Jones has also mentioned that he played bass for the self-proclaimed 'greatest rock and roll band in the world', though this too is a source of controversy.

What we do know is this: Brian Jones is British, has well-coiffed hair, and dresses impeccably. He is sensitive and polite, and always knocks before entering. Jones is quite diplomatic, and cites Winston Churchill and Groucho Marx as the two most influential people in his life.

Here is what we don't know: What was Brian Jones doing all those years before joining the Delavigne staff? How does Brian manage to get his hair looking so perfect? Is Brian a spy, sent to infiltrate Delavigne Headquarters? Is Brian in love with Bruno Delavigne, or does he leave chocolates on Bruno's pillow out of his sense of professional duty?

A figure shrouded in mystery and hair spray, Brian Jones is already one of the more intriguing characters on the Delavigne team.

Ta ta. Indeed!
He doesn't even like tea!
Bruno is sick. He needs a comforting hand to stroke him.