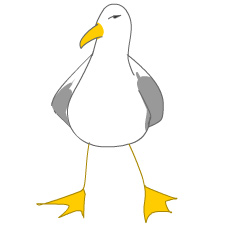 Ah the seagull! Small feathered airplane of the heavens! Created in a laboratory in 1883 by mad scientist Dr. Nikolai Funderbrünt, the seagull is known for its aggressive picnic-basket stealing as well as its sweet, soothing, melodious cry. The tender voice of the seagull is often used as a lullaby to calm crying babies as well as in elevators and waiting rooms across the Western (and Eastern) hemispheres.

The seagull population declined significantly during the 'great seagull war' of 1973, when seagull hunting was legalized briefly by President Nixon, who had suffered from seagull-related nightmares his entire adult life. Eventually the seagull population stabilized, and seagull-human relations improved considerably when a seagull was appointed as the secretary general of the United Nations.

Extract of the seagull mating song